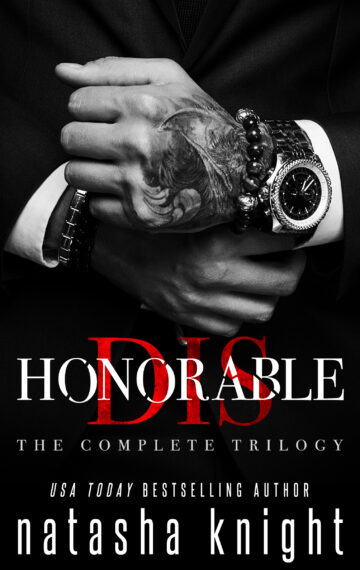 This set contains Dishonorable, Corruptible and Unhinged, the complete stories of the Amado Brothers!

I didn’t know Raphael Amado when he turned up on our doorstep demanding restitution for an old debt. My grandfather knew him well, though, and he quickly conceded.

Six months later, on my eighteenth birthday, Raphael came to claim me.

He stole me from my home, taking me to his Tuscan estate, where from the crumbling chapel to the destroyed vineyard to that dark cellar, the past stalked him like a shadow. Even the walls held secrets here and I’d need to uncover them all to survive.

Because taking me was only the beginning of his plan.

Sofia was the sacrifice to pay for her grandfather’s sins.

She accused me of being the devil. And she’s right. But the truth was, he betrayed her.

And when the time came to promise to love, cherish, and obey she spoke the words that would seal her fate.

We have a common enemy, though, my unwilling bride and I. But even the devil protects what’s his. And she’s mine.

She just doesn’t yet know how much protecting she needs.

When I disappeared out of Lina Guardia’s life years ago, it was for her own good.

She was too young.

Now our paths cross again. But things are different.

She’s got secrets. Dangerous ones.

She thinks she can keep me out of her world, but she’s in over her head and needs a protector.

I just have to remember I can’t be more than that to her. I can’t give in to the temptation.

Because in six months, I’ll be a priest.

And she complicates things.

*Author’s Note: Corruptible was originally published with the title Disgraced.

But he’s back. Risen, like Lazarus, from the dead.

And he thinks I betrayed him.

The way he looks at me should terrify me, but I’m drawn to him. I always have been.

Even now. Even though I know if I’m not careful, his obsession will destroy us both.

I should have died that night two years ago. My mistake cost my men their lives. It should have cost me mine. But I survived. And the day I learned Eve did too, I made it my mission to find her.

I sought her out. Found her living her new life.

I’ve been inside her house. Eaten her food. I’ve stood beside her bed and watched her sleep.

She has so many secrets, and I know one of them. It’s the one where our pasts collide. The one that destroyed me.

And it’s the reason I’ve come for her.

I never intended to touch her, but I did.

And now that I’ve had a taste, I want more.