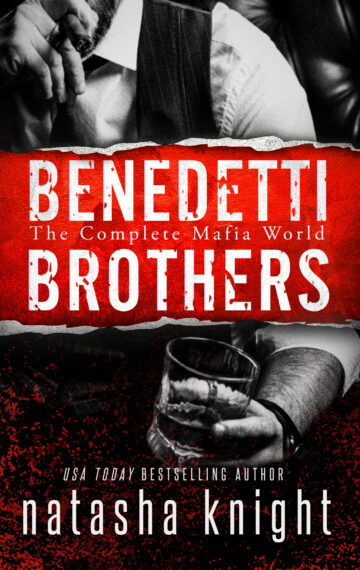 This discounted set contains all five books of the Benedetti Mafia World!

It all started with a contract signed by him, then by me, while our families watched. While my father sat silent, a man defeated, giving his daughter to the Benedetti monsters.

I obeyed. I played my part. I signed my name and gave away my life. I became their living, breathing trophy, a constant symbol of their power over us.

That was five years ago.

Then came the time for him to claim me. For Salvatore Benedetti to own me…

I’m the last-born son of the Mafia King.

The one with nothing to lose.

I walked away from my family. Turned my back on everything that should have been mine and became what I was meant to be.

I’m the first-born son of the mafia king. The favorite. Destined to rule, I’m a dangerous man, a ruthless one. But in my world, you have to be.

Then Natalie stumbles into my life. Wrong place. Wrong time…

Cilla made the choice. She offered the deal.

But it’s not a hero she seeks. It’s an avenging angel. A dark knight. That, I can do. I’ll slay her dragons, but it’ll cost her, because in return, I want everything. And I’ll take it.

I’m a cartel princess. But my family was betrayed, the cartel toppled. And I’m not supposed to be alive.

Giovanni finding me means my enemies will find me too. But I’ve caught his attention and he wants more than my secrets.