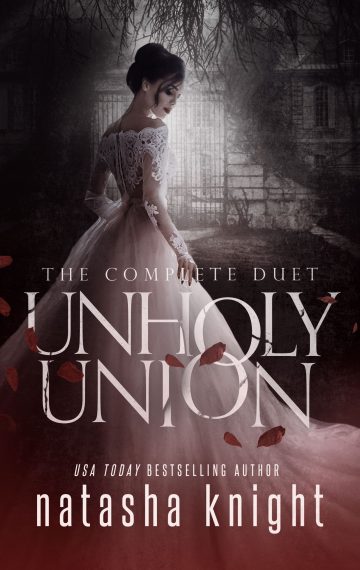 Monsters don’t hide in the dark.

When I met Damian Di Santo in a dark corridor of my family home I knew he was a monster.

I was a scared girl.

He was already a man.

That was when his twisted countdown began.

Marked by dead roses and sharp thorns, eight years passed each bringing me closer to becoming his. Until the eve of my eighteenth birthday.

That was the night he returned to claim me.

Circumstance put Cristina on my path.

Fate bound her to me.

Cristina and I share a common past. A single night that changed the course of our lives.

She asked me if I was a monster the night I met her.

She’s about to learn I’m her monster.

Because the countdown that began eight years ago has ended. Her time is up.

On the stroke of midnight, she’s mine.

In this house of lies and liars, behind every locked door is a monster in wait.

Forced to marry a man I hate, I’m now bound to Damian. There’s something between us that needs to be played out. I don’t know what it is. I don’t know that he does. But we’re locked together for some strange, grim purpose.

Will we survive it?

He may since he’s the one pulling the strings.

My brother will tell you that I usurped his throne and maybe I did, but it had to be done.

I built our family up from the ashes. I put us back at the top of the food chain. And marrying Cristina was as much to cement my place as it was to keep her safe.

She doesn’t believe that last part yet, but I see how she clings to me in the darkness. And the lock on her door is as much to keep the monsters out as it is to keep her in.

I told her one lie, though. I made her a promise I’m not sure I ever meant to keep. I told her I’d let her go once I had what I wanted.

But in a world of monsters, I need her like man needs air. And I have no intention of letting her go.