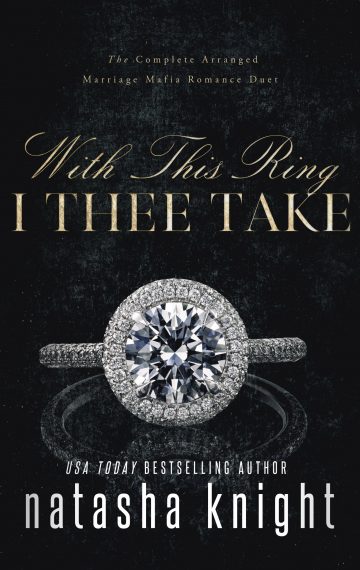 This set contains With This Ring & I Thee Take, the complete story of Cristiano and Scarlett, an Arranged Marriage Mafia Romance… Cristiano Grigori brought his army of soldiers to kidnap Scarlet De La Cruz on the day she’d be wed to his enemy. He took her to his mansion on a secluded island and made her his bride and his pawn against his enemies. This is their love story.

When Cristiano Grigori came for me, he didn’t come alone. He brought his army to kill the soldiers at my door and took me for himself.

He put his ring on my finger and marked me as mafia property.

My brothers thought they had wiped out the Grigori family, but Cristiano is very much alive.

And he has one purpose. Revenge.

The De La Cruz brothers were pawns to my real enemy. They were nothing but foot soldiers.

Killing them was easy enough.

Taking their sister, well, that’s another story. And she doesn’t know the half of it.

She’s the daughter of a once-powerful Cartel King. And through her I will flush out the rest of the rats who sought to wipe out the Grigori name.

Keeping her is just a bonus.

Cristiano is my enemy. He’s also the only man with whom I’ve ever felt safe. Protected.

But I have to remember that he married me with one purpose in mind. Revenge. I would be the bridge to his real enemies.

I can’t let myself forget that he isn’t the hero of this story. His hands are covered in blood. I saw that with my own eyes.

I thought I knew Scarlett’s past, but I didn’t know anything.

I thought I knew the worst of monsters, but I hadn’t seen anything yet.

Sometimes you have to lie to yourself to survive.

Sometimes it’s those closest to you who will bury their knives in your back.

Too many times it’s the innocents who pay for your mistakes. For your refusal to see.

I can’t let Scarlett pay for mine.

But I may be too late to stop it.

Find With This Ring I Thee Take Online